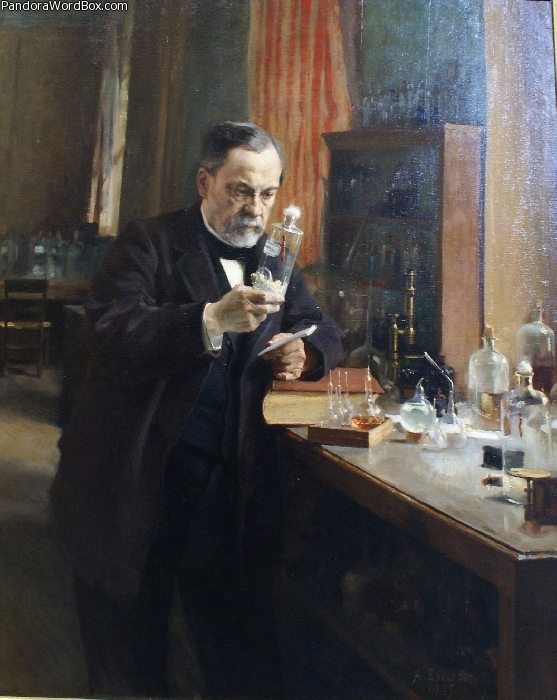 This portrait shows Pasteur in his laboratory examining the spinal cord from a rabbit infected with rabies. Eldelfelt, a well known Parisian artist native from Finland, presented this work at the 1886 Salon at the Depot du Musee et Domaine National de Versailles et de Trianon.

One example illustrates Pasteur's greatness. He discovered and named what today is known as "virus". Consider that viruses are invisible. Furthermore, consider that the risk of his professional reputation and his personal freedom, he treated a dozen people likely to die from hydrophobia caused by a virus (rabies). His humanism forced him to treat them with an untested vaccine - none of the treated became ill. One of them pledged  his life to guard the sarcophagus of Pasteur and he did so for the rest of his life.

Pasteur was a genius who became a world hero mostly because he dared to treat a child with a never tested vaccine on humans and proved that the method could prevent rabies or hydrophobia, until then a fatal infection. Even so, Pasteur's impact was even greater because of his pioneer contributions that laid the foundations of Experimental Scientific Medicine, Physiology, Biochemistry and Microbiology. One example is "Pasteur"ization, now a universal technique to render milk, beer and other nutrients bacteriologically safe. Disregarding that he was not a physician nor a surgeon, Pasteur strongly advocated the adoption of "aseptic" surgery (Lister listen). For Pasteur, "basic" sciences had to be "applied" because all sciences were to serve humanitarian ends. As a humanist, Pasteur avoided exploiting his discoveries by patents and other "deals" rather common in the academic and scientific modern media. As stated by T. Dobzhansky, all great scientific discoveries and scientists transcend the boundaries of their discoveries and life. Pasteur's spirit continues to illuminate the human condition - one example is the 2008 Nobel Prize in Physiology and Medicine honoring a member of the Pasteur Institute (Dr. Francois Barre-Sinoussi) for investigations of the HIV-AIDS virus.