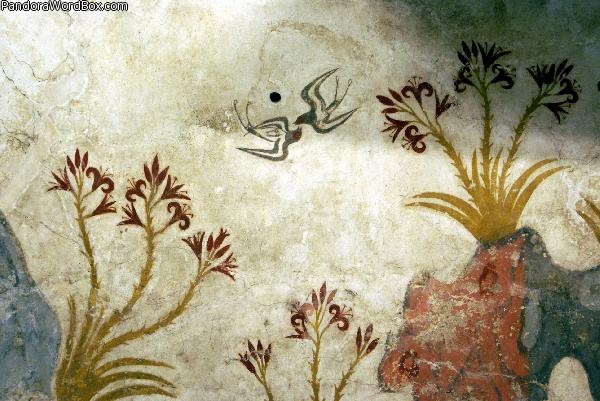 Animated scene of a pair of flirtatious swallows, animating the scene - perhaps symbolically annoucing the return of Persephone and Floralia as emblems of Spring (in Ukrainian, the spring month is "Kviten" for "the flowering one" or April and when "birds start singing", according to Ovid).
Swallows, known as "Lastivka" or "Golondrina" in Ukrainian and Spanish, are names that link "deglut, glotis, glossa" with "laska, laskavo" and "golosina, goloso ..." which convey notions of kindness, amiability, love, lust, as well as gluttony, gluten, glucose, and even "sweet tooth".
This fresco is a detail of a large mural found in Akrotiri, a Minoan city near the tip (acro) of the island Tiri, Thiri, or Thera (renamed by Venice as Santorini). In 1450 BC, a volcanic explosion not only destroyed Thera but the dominance of the Minoan civilization as well. This event inspired stories of a vanished civilization named Atlantis.
20210322 ww