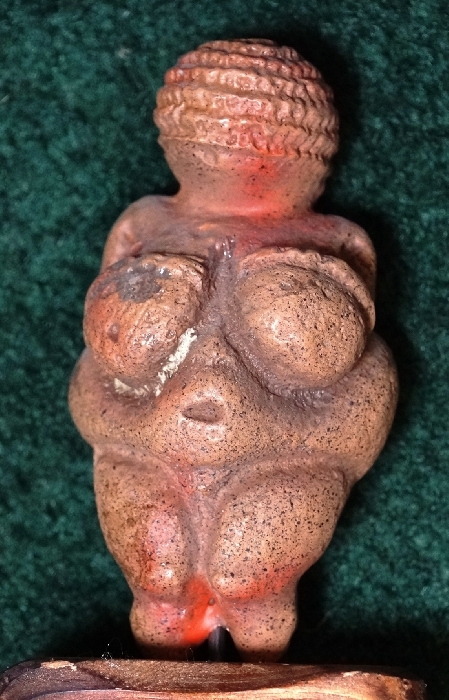 Sculptures from this ancient era are generally called "Venus figurines" because of depictions of mature plump nude women with prominent sexual features. Presumably, the intent was to represent fertility. There are numerous other similar figurines from that era.
The rubric "Venus" points as much toward notions in Mother Earth, Astarte, Ishtar, Inana ... fertility, motherhood, love, ... Aphrodite. The emphasis on obesity probably represents ancient notions linking adiposity with abundant nutrition thus health and therefore with fertility. Worth to note is that this statuette has no elements suggestive of links to Babylonian tastes as do many others of that era.
Virtually all ancient representations of Venus up to the Roman era represent sexually mature women in contrast to the current fashion to stress thin and sexually immature teens. In fact, many classic depictions of Venus stress a fondness for generous buttocks which, if beautiful, were referred to as "callipygia" (beauty + buttocks). I wonder if Venus of Milo would be engaged by the "fashion industry" as a model. Also notable is a recent trend toward puritanism coexisting with flourishing and tolerated pornography. This schizophrenic social dichotomy can be illuminated by the answer to the question - which officially school text could include the image of Venus illustrated here. Consider that the Russia of Putin allows a flourishing pornography industry accessible internationally, while the Orthodox Patriarch of Moscow, a champion of Putin's regime, demands that images of classic sculptures representing David, including that by Michelangelo, be represented with his masculinity hidden.
20200919 ww