DANAE SEDUCED BY A SHOWER OF GOLD 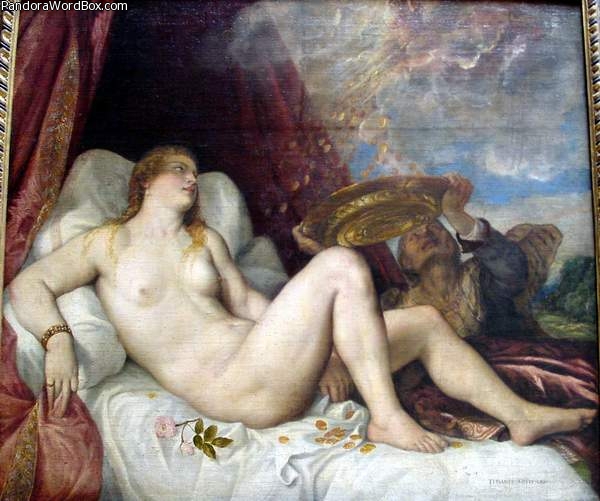 Akrisios (Acrisius), king of Argos, locked his daughter Danae in a tower to prevent a prophecy by an oracle about becoming impregnated by Jupiter (Zeus) and giving birth to a son, eventually named "Perseus" ("per-Zeus" - future king of future Persia), who was destined to kill him. The impregnable Danae became impregnated by spreading her femurs or thighs to stretch a cloth or hold a tray to capture a shower of gold, which she did not know was, in fact, a metamorphosed Jupiter (Zeus). The prophecy was fulfilled when, by accident, Perseus threw a disc that mortally injured his grandfather Acrisius.
Titian produced at least six similar versions of this painting - he charged high fees to the Cardinal Alessandro Farnese, Philip II of Spain, and Emperor Rudolf II among others. Much of these paintings were not painted by Titian, but by his students and helpers. The minor variations between these versions raised the question of what is a copy, plagiarism, fake, or an original. Can you fake yourself? - How many strokes of paint should have Titian added to a nearly finished painting to make it an "original"? Did the emperors or kings that paid high fees know that their colleagues had just about the same versions? Did Titian "mark" these paintings as "originals"? - meaning what? ... Titian was a Venetian, and Venice then was the fountain of mercantilism and tolerated venal and venereal sins.
20200901 ww