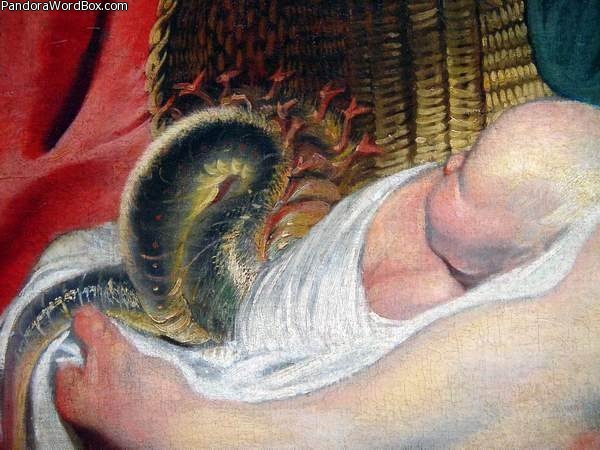 Translated as "Les fillers de Cecrops trauvant lenfant Ericthonius" or "The daughters of Cecrops finding the child Ericthonius" who had "snake like feet".
Ichthyosis denotes "skin scales akin to a fish" (in the case of Ericthonius, perhaps similar to a chicken leg as depicted here). In rare instances it presents as a hemi-ichthyosiform skin (one half of the body) with homo-lateral associated malformations.
This mythical story is suggestive of CHILD (Congenital Hemidysplasia with Ichthyosiform erythroderma and Limb Defects) syndrome. Against this hypothesis is that Cecrops was presumably a "boy", since he is portrayed as a "King" - CHILD syndrome most often is an expression (phenotype) of an X-linked mutation (noted in females - it apparently is lethal in males). Children with congenital skin-scales like a fish (ichthyosis) - if impacting only one body side (hemi-ichthyosis) - have concurrent homo-lateral malformations, in particular reduction of limbs.
20210426 ww