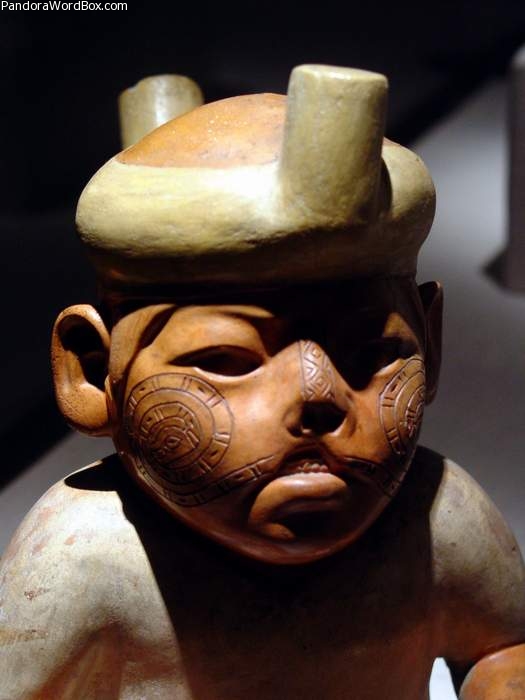 "Holoprosencephaly - Arrhinencephaly Ceramic Portrait Vessel of a Man with a Harelip and Tattoos from the Moche Culture on the North Coast of Peru", 100 BC Field Museum, Chicago, Illinois, USA

Midline agenesis and malformations of the face often are referred to as schisis or clefts which may erroneously suggest prior existence of tissues which never formed. For example, the lack of the central or midline upper lip concurrently with a single tube-like nose (proboscis) are signs that signal a combination (facies) suggestive of holoprosencephaly (undivided fore-brain). Some may argue that such nuances are "irrelevant". I would argue that "loose talk" is misleading at the expense of optimal medical sciences. This facies (are conglomerate of signs which collectively suggest a syndrome) is generally a reliable signal of a failure of the anterior brain vesicle (prosencephalon) to divide into left and right frontal lobes. The consequences include (sequences) conducive to lack or underdevelopment of orbits or ocular globes (anophthalmia - microphthalmia) and agenesis or hypoplasia of the nose (arrhinia - arrhinencephaly) or a single tube nose (proboscis) and further distally from the brain a lack of midline upper lip (prolabium), as well as agenesis of the two, left and right, incisors. NOTE: the artist wisely did not represent the four upper incisors. This facies also illustrates upward slant of the palpebral fissures and dysmorphic ears. I suggest that you read a companion overview of the above concepts and visit our CEO web-site to view a gallery of clinical illustrations of holoprosencephaly.
20200930 ww