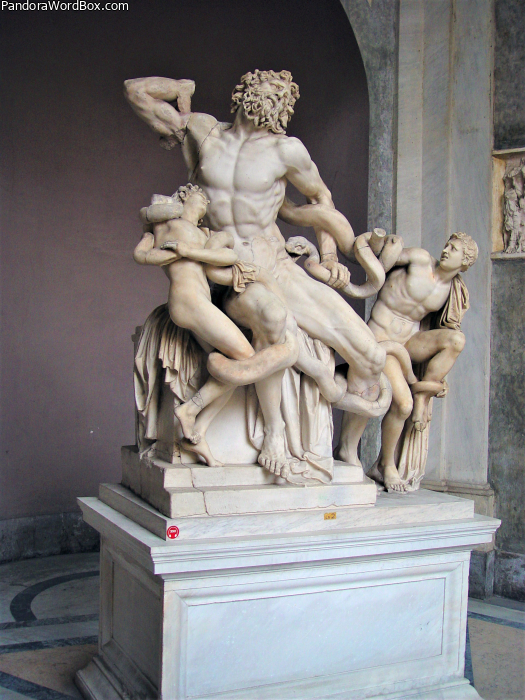 Laocon was a Trojan priest whose story is a part of the Iliad. He urged Trojans to burn the wooden horse offered by the Greeks. His warning is now enshrined in all European languages - "Timeo Danaos et dona ferentes" or "Be aware of Greeks bearing gifts" , "Ser consciente de los dones griegos", or "Achten Sie aus griechische Geschenke" , as stated by Virgil in the Aenied II 49 . Athena was the champion of the Greek cause. The call by Laocon posed a threat, so she blinded him, but even so he persisted calling the rejection of all gifts by Greeks. This led Athena, with support of other deities, to command two sea-serpents to strangle Laoccon and his twin sons. Some versions mention that the serpents were named Porces and Chariboea. It is known that this statue stood in the Palace of Emperor Titus (79-81 AD). It was found in 1506, and Michelangelo was among the first to admire its perfection. The Pope Julius II agreed to place the statue in the Vatican for its permanent protection.
20200110 ww