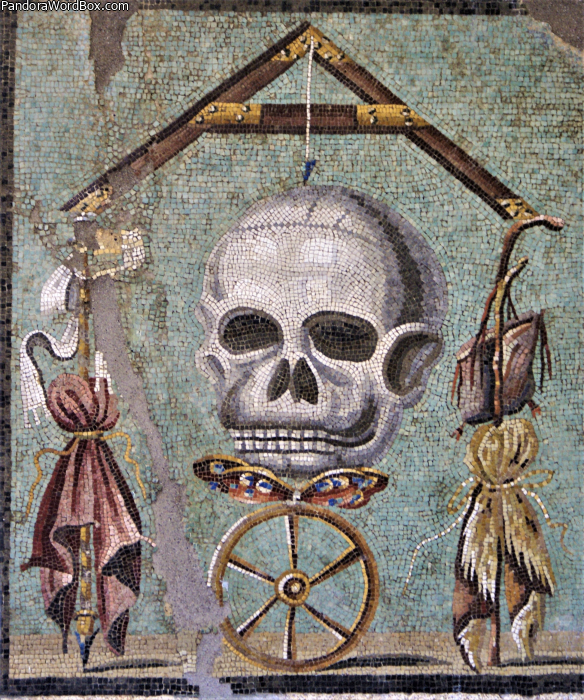 Unique and magnificent symbolic mosaic. Artful representation of the death leveling power to negate wealth or poverty, a depiction stimulating meditation: a right angle; the force of gravity; the ephemerial butterfly-like nature of life itself; the wheel or cycles of time; emblems of power, as well as rags and a bag of a beggar.
Skulls often are emblems of Halloween, Facist, and other groups and traditions focused on death. Pirates used a flag of skull and bones - and so do members of a privileged arrogant secret society of senior students at Yale University calling itself as "Skull and Bones". Many future presidents of the United States were members. Because this organization reflects many features of the US power group, it deserves attention. Organized in 1832, it selects its members in a peculiar manner which is beyond the scope of this summary to describe further. Membership was limited to white protestant males and only recently opened its membership to women and increasingly to jews. Although being a secret society, it is known that its members included W.H. Taft (President); G.H.W. Bush (President); J.W. Bush (President); J. Kerry (Secretary of State), among other well known politicians.
20220204 ww