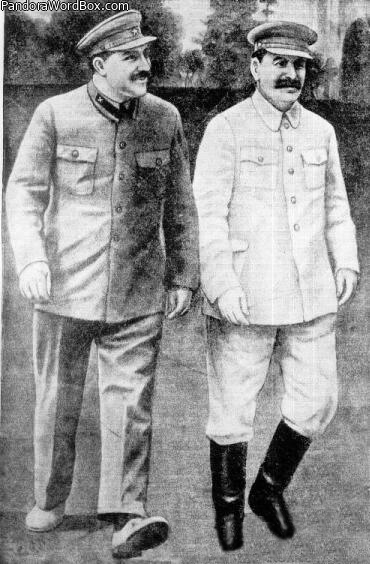 Stalin and his deputy Lazar Kaganovich organized a "Terror-Famine" or "Great Famine" in Ukraine, called "Holodomor" (lethal hunger from holod implying starvation and mortal). During 1932-1933 over 5 million people in Ukraine starved to death. For Kaganovich a holocaust was only a statistic. Likewise, Stalin is cited as having said "killing a man is murder but killing thoushands is only a statistic". The Bolshevik state that they controlled decided to force farmers into collective farms by starving them. The program was implemented by Bolshevik Commissars, the vast majority of whom were neither Ukrainians nor Christians, as was the local population in Ukraine.
This man-made famine is now considered the greatest Holocaust and Genocide event of the 20th century. Like Turkey that denies its role in the holocaust perpetrated against the Armenians, so do the Russians of today, in particular the current dictator of Russia, Mr. V. Putin. He has gone even further. Putin is now the perpetrator of what may be as great or greater crime against humanity and genocide of Ukrainians by the assault by Russian forces on Ukrainian civilians. The Russians do have a penchant for crimes against humanity. They did so during Ivan the "Terrible", Peter the "Great", the GULAG extermination camps in Siberia, Chechnia, Georgia, Syria, and now Ukraine. Perhaps, they acquired this cultural trait from the Tatars to whom Moscow was subject for centuries while Ukraine was not.
20221107 ww