MEDICINE is an admixture of Arts and Science. The name implies MEDIATION and belongs to a large web of words including MEDDLE, MEDIA, MIDDLE, and MIDST.

The mission of Medicine is to engender an environment, culture, MEDIA, MEDIUM or MILIEU, favorable to sustain and MEND or reMEDy health (from medere, or "care for") by formulation of therapies and pharmacy. A clinician serves as the MEDIA or interMEDIAry or communication agent linking a patient with Medical Arts and Sciences. Consonant with the above is THERAPEIA ("caring attendant") or healing therapies, including by dangerous potentially toxic agents inherent in PHARMACEIA ("poisonous powers"). In fact, PHARNACEIA is given as the nymph that lived in a poisonous water well. Obviously, physicians aspire not to be poisoners and are trusted by societies by having medical licenses to prescribe "controlled substances" that are inherently dangerous. It is not enough for therapies to be SCIENT and SCIENTIFIC. Medicine blends Science with Arts, thus it is not enough for a physician to rely on science, he also must rely on his conSCIENCE, in particular, his "sense of what should be avoided" and "self- shame". The ancients call such AIDOS or eidos, from which arose what we today call ETHICS. Without a strong Aidos, Ethics is easily seduced by those who seek to exploit patients who inherently are weakened by ailing.

Ethical medicine strives to foster what is "good for the patient" regardless of who the patient is and what values he may hold. Medical Ethics also demands that a physician or "medico" in Spanish, applies his full capacity to serve every patient with disregard for his own convictions that are extemporaneous to Medicine, including personal ideology, faith, or material aspirations. Those who profess to be a "medico" implicitly must adhere to the principle of "primum non nocere" or "first do no harm" - the essence upon which rests the physician-patient trust. Aesculapius offered a bribe by a client of Mercury (the champion of thieves and merchants) for access to his daughters (Medicine, Pharmacy, and Public Health)
(W. Wertelecki, M.D.; extract from Pandora WordBox Medical Humanities Illustrated Overviews)
20220323 ww
RELATED
Overviews 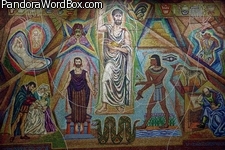