Linguistics, which seeks the roots (etymology) and current meanigns of words of a particular language. Ideonomy on the other hand, seeks the meaning (ideas) inherent in words that transcend particular languages and illuminate notions common to the human species. Here the example concerns a fundamental biologic characteristic of humans - sleep.
"Sleep" (a temporary demise) and death (a permanent sleep) are a component of a large constellation of notions that transcend languages and other barriers. "Sleep" is a basic component of human nature - it consumes nearly 50% of the time of an individual exists and what occurs during sleep remains to a large extent a mystery.

Sleep and slumber point to slip into somnolence which is personified by Somnus. In Ukranian sleep is spaty and spad implies to fall, akin to "falling asleep". Roman poets renamed Hypnos  as Somnus whose mother was Nyx or night orNich - perhaps this led Nix for not or Nichoho, in Ukrainian meaning "nothing", a notion consonant with the fact that in a dark night we see "not a thing" or nothing.
The members of the "sleep" family or constellation include Thanatos, twin brother Hypnos who induced irreversible sleep instead of the the reversible sleep induced by Hypnos (with or without the aid of hypnotics), induced irreversible sleep or demise.

Peaceful sleep but she never awoke (a well documented actual event).
Those about to be "put to sleep" by Thanatos were offered a drink of water from the nearby river Lethe  to help them to forget their loves, riches and tribulations. On occasion he also used opium and morphine he extracted from poppies he cultivated in his garden. However, most of the morphine and opioids were used by his brothers Phantasos and Phobetor to shape dreams into phobias, fears, phantasies, and day-dreams.The father of this family was Erebus, the patron of the realm of Darkness and Silence called in English hell.
The above is a sketch aiming to underscore three points: poets shaped much of the  vocabulary of virtually all languages; the beauty of poetic legends is the source of their grit and grasp upon human imaginations that have persisted for millennia and across cultural barriers; and while words are symbolic communication elements, ideonomy provides pathways to grasp fundamental biologic components of the human psyche.
20170729 ww
RELATED
Overviews 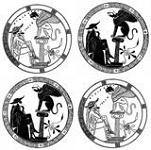