Ladon being nurtured by Hesperides nymphs
Ladon is rarely a major topic of Mythology accounts - the Hesperides Golden Apples are. My view is that Ladon as a serpent or a multi-headed medusa-like monster is a significant personification distorted by Biblical cultures. Ladon guarded a source of knowledge and wisdom and Hercules who killed Ladon to steal the golden apples represents mortal humanity. The story is homologues to the Biblical notion of the tree of knowledge, Eve, Adam and a serpent representing the "Devil". Why should Ladon or the serpent be seen as evil? That is the question!
20171219 ww
RELATED
Overviews 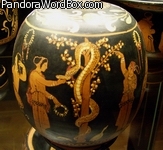