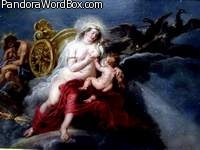 
This entry is dedicated to all mothers, human and otherwise. The occasion calls for an emphasis on beauty, which prompted us to frame this page with icons and Madonnas representing the summit of European artistic creativity.
Some say that mothers help us have a past, live in our present, and enrich our dream of a future. Thus, we thank all "Mothers" for our heritage, lives, and hopes.

Charming each other
The idea to thank mothers is ancient. To do so, Greeks and Romans greatly honored Rhea, also represented as Cybele, Ceres, Demeter, Ge, Gaea, Gea (as in gene, genesis, genetics), "Magna Matter" (Great Mother) was "Mother Nature". These vistas are the subject of another overview dedicated to Demeter or Ceres. Furthermore, from "mother" also arise related ideas explored in illustrated overviews dedicated to "mother", "mothering" and "maternity". We only stress here that in "mother", as one of the human parents, one obvious bridge is with "matrix" where "mater"nity is "mater"ialized by the generation of a new living indivisible individual.
Under Hinduism, there are Seven Divine Mothers, each charged to teach us how to repress evil by avoiding:
Rumor
Envy
Anger
Lust
Pride
Illusions
Fault finding
Under the Roman empire, the festivities dedicated to Magna Matter or Hilaria were immensely popular and took place from March 15th to March 18th. After Christianity was well established, the Church tried but failed to extinguish this pagan custom and opted to co-opt the festivity and name itslef as "the Mother Church". With time, the popular reverence for Demeter (Ceres) shifted toward the worship of Mary as the mother of Jesus. Many representations of Mary as Saint Mary show her holding the child Christ - however rare and magnificient exceptions are mosaics in Ukraine such as the 10th c. mosaic in St. Sofia Cathedral in Kyiv, Ukraine. Mary is shown alone. Likewise, a new mosaic in a cathedral in Rivne, Ukraine, shows Mary without Jesus Christ. This is, perhaps, an illustration of Mary seen as a "Magna Mater".

Lone Virgin - St Sophia - Kyiv
From an "Anglophone" perspective, Mother's Day can be traced to the 17th. century when the "Mothering Sunday" was celebrated on the fourth Sunday after Lent. It was then that servants were given a permission to leave in order to visit their mothers.

Ukrainian Icon from a village
In the United States (of North America), many consider that it was Ms. Anna M. Jarvis (1864-1948) who revived the Mother's Day holiday as we know it. Others say that it was Ms. Julia Ward Howe who held Mother's Day meetings in Boston. In any case, Ms. Jarvis, a spinster, moved by the death of her mother, felt compelled to campaign for the adoption of a national Mother's Day holiday. She felt children needed a greater appreciation of their mothers. By 1910, West Virginia and Oklahoma proclaimed "Mother's Day" and the next year all States followed. Gradually, Mother's Day became an international festivity. In 1914, Congress designated the second Sunday in May as Mother's day and ordered that the USA flag be displayed on government buildings "as a public expression of our love and reverence for mothers of our country". Belgium, Denmark, Finland, Italy, Turkey, and Australia celebrate Mother's Day on the same day as the USA, and over 40 other countries do so at other times.

La Orana Maria
Unfortunately, it is fair to say that Mother's Day celebrations, like Valentine's Day, Christmas, and even Easter, are promoted and concurrently distored by mercenary merchants. In fact, by 1923, Ms. Jarvis was so enraged by the commercialization of the holiday that she filed a lawsuit ... she stated that the festivity was to be a day of sentiment, not profit ... she died disappointed. It is left to each of us to be aware that "price" translates poorly into "value" and that the most precious gifts to a mother are ongoing expressions of filial devotion.