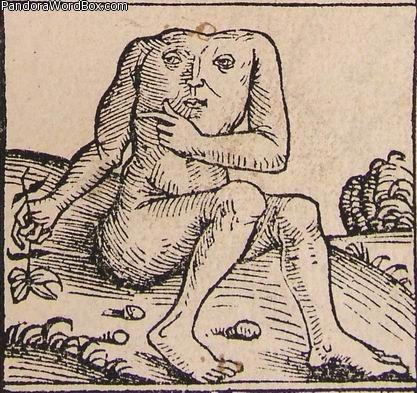 "Acephaly Anencephaly Woodcut " (see related A), 1487 U Michael Walgemut (workshop of) (known as from the Nuremberg Chronicles) Nuremberg, Germany

The above is one of many woodcuts illustrating the Nuremberg Chronicle printed in 1493 in Nuremberg as "Liber Chronicorum" that speaks of the Creation, the Deluge, and subsequent events. The publisher and printer was Anton Koberger, the godfather of Albrecht Durer. Koberger had printing presses in Nuremberg, Lyon, Budapest, and other locations. The woodcuts are by the workshop of Michael Walgemut and his stepson Wilhelm Pleydenwurff made in 1487-1478.
Acephaly or Anencephaly is a rather disturbingly common malformation among the birth defects being noted in Ukraine, particularly in areas contaminated by the Chornobyl (Chernobyl is the Russified variant term) disaster (see related images for further elaborations).
20210112 ww